The research on Tanzanian adolescents to understand their perceptions on HIV is now launched.

M4ID recently launched the research phase of Next T, our project with Tanzanian adolescents to better understand their perceptions and behaviors surrounding HIV.

The sun is already high in the sky in Tanzania when young women enter the workshop space of the local ward office on a quiet street near Dar es Salaam. We are in Tandika ward of Temeke District to speak with young Tanzanian girls and boys about their lives and their perceptions of HIV. There is a distinctive sense of excitement amongst our team as we kick off the workshops. The research can finally begin.

This research is conducted in support of our Next T project, in which M4ID applies human-centred design to propose innovative methods for increasing the uptake of HIV testing and linkage to HIV care for adolescents and young adults aged 15-24 years. We aim to closely involve the youth in the design of solutions. In Tanzania, improving HIV testing models is critical – over 1,4 million people are living with HIV in the country.

HIV-related stigma remains a significant barrier to many young people in Tanzania accessing HIV counseling, testing and treatment. In the workshops we collectively explore the themes of life expectations and ambitions of the adolescents, social norms, HIV perception and knowledge of care options. The workshops take place not just with adolescents and young adults, but also with health care providers, young people’s influencers in the community, and older men aged 30-40 who tend to be partners of young women.

Although the information is yet to be thoroughly documented and analysed, interesting observations already surface. The research team was familiar with the concept of “sugar daddies” – older men who support their much younger female partners with gifts and money. Now we also heard young boys talk about “sugar mamas”, who are older, often married women with young male partners. The perception was that many of these women are HIV positive, but go to great lengths to hide their status from their partners.

Discussions around the treatment of HIV positive people in the community surfaced an extremely negative outlook towards life with HIV. Most young people believed that HIV is a death sentence, and only few were aware of the potential of antiretroviral therapy treatment.

But we aren’t jumping to conclusions. These are early days of the research. We will also conduct all these activities in the Kyela District in Mbeya region, which is a very different context. Following the analysis of the research data, we will identify design drivers, conduct co-design and prototyping with various key stakeholders, and hopefully develop solutions that truly make a dent in testing levels among young Tanzanians. 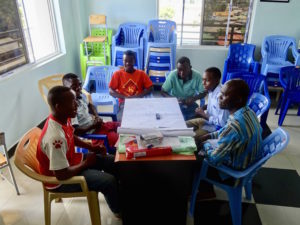 Tanzanian adolescent boys talking about their perceptions of HIV. 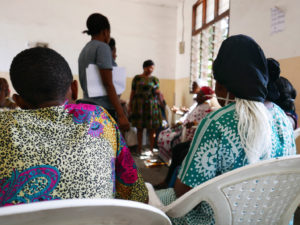 Lively discussion at the girls’ workshop in Temeke District.

Next T in a nutshell

The research on Tanzanian adolescents to understand their perceptions on HIV is now launched.
Tags: